The following is a letter to the editor of Pain Medicine News, submitted by Dr Jeff Marksberry, Chief Science and Clinical Officer of Electromedical Products International Inc.The letter is in response to an article written by Pain Medicine News, based on a review article done by the VA Evidence-based Synthesis Program (ESP).
To the Editor: 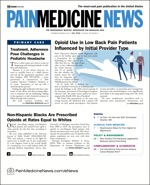 The recent article titled “Evidence Insufficient to Support Cranial Stimulation for Chronic Pain” (Pain Medicine News 2018;16[7]:1) was a summary of the review article published in the Annals of Internal Medicine, titled “Benefits and Harms of Cranial Electrotherapy Stimulation for Chronic Painful Conditions, Depression, Anxiety and Insomnia” (2018;168[6]:414-421). The report focused on studies that used devices no longer on the market, while omitting most of the research relevant to the Alpha-Stim (Electromedical Products International) brand of cranial electrotherapy stimulation (CES) devices, which are primarily used in the Department of Veterans Affairs (VA), Department of Defense (DOD) and civilian markets. Alpha-Stim is the only CES device on the Federal Supply Schedule for the DOD and VA. The authors set arbitrary exclusion criteria in finding studies for their review—far more restrictive than the government’s definition of valid scientific evidence—which allowed the reviewers to eliminate much of the best evidence supporting CES. The reviewers completely omitted animal and mechanistic studies including EEG and functional MRI research, and they chose not to speak to any VA practitioners who have clinical expertise with CES.

More than half of the VA medical centers have used Alpha-Stim technology, and in 2017 more than 100 VA medical centers purchased Alpha-Stim devices for veterans. This review article is completely at odds with the judgment and experience of licensed health care professionals who actually practice medicine in the VA. It reviewed a legal medical treatment used in the VA for decades independent of the people who actually use it in the VA who know exactly how well it works for the apparent purpose of denying them the right to prescribe it. The report was successful at stopping all VA medical centers from purchasing CES devices for two weeks. Within that time frame, so many VA practitioners complained about the inadequate review of science that 75% of the VA medical centers were promptly provided waivers. Soon after, 100% of the business was reinstated.

The review was also extremely biased. For example, Lande and Gragnani’s short five-day insomnia study of service members at Walter Reed National Military Medical Center was reviewed as having no difference between groups. There were actually significant effects on days 1 and 4, and a trend toward significance on day 5 (P<0.079). More importantly, service members slept an average of 43 minutes more a night.1

It is revealing that the Annals report reviewed many studies from 40 years ago that used devices long off the market while omitting current and relevant research. CES devices are unique to one another based on the waveform produced as well as the device parameters. These devices are not like generic drugs, but rather a category of analgesics, for example, that range from aspirin to morphine. Alpha-Stim has over 100 published reports (www.alpha-stim.com/ wp-content/ uploads/ 2016/ 12/ CE-June-2018.pdf) over its 37 years of distribution, most by independent researchers at American universities, the VA and the DOD who have attained institutional review board approval without industry funding. Because Alpha-Stim is subsensory, an effective double-blind, randomized controlled trial protocol is used in much of the research. The results are consistently robust with medium to high effect sizes.

If the VA is actively seeking nonaddictive, safe and effective treatments for anxiety, insomnia, depression and pain, then a review regarding the benefits and harms of a treatment should consider all valid scientific evidence without bias, especially when no safety issues exist. That would be a true review of CES in 2018.